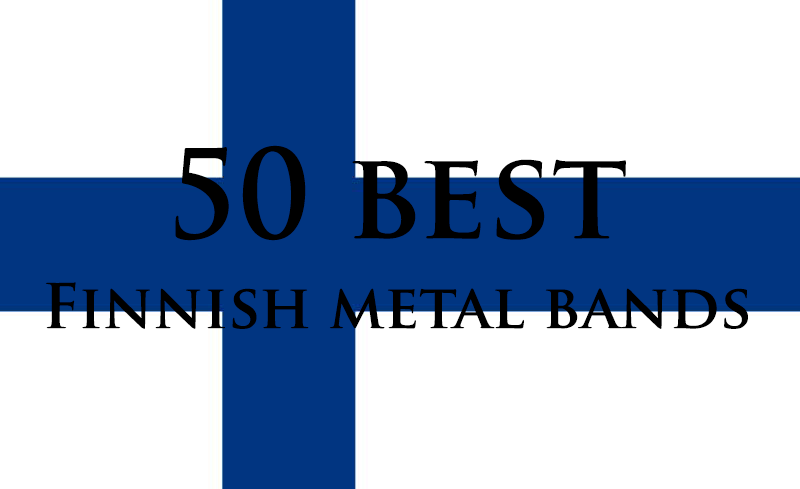 Just as the metal bands per capita map indicates, Finland is the home of a crapload of good metal bands. These are my 50 favorites. I’m going to exclude some gateway metal essentials like Children of Bodom and Nightwish, simply because I don’t personally enjoy them anymore . I’m also not that into traditional heavy metal and power metal. This list will be heavy on the doom metal and melodic death metal though.

If you’re too bored to read the list, you can just check out my Finnish metal bands playlists. There’s one on YouTube and one on Spotify, featuring all the bands from this article.

The list starts off with a classic pre-Amorphis death metal band. Abhorrence has quite a unique sound; truly twisted and cataclysmic to the core. I consider their early songs “Caught in a Vortex” and “Vulgar Necrolatry” absolute old school death metal classics.

“Decrowning” is one of the most underrated Finnish metal albums; catchy, technical and with a youthful aggressive edge. Amoral had so much energy on the album and it’s a big highlight for me. Sadly, the band lost its appeal for me after turning power metal.

It’s impossible to a list of the best Finnish metal bands without mentioning Amorphis. No matter which genre your taste originate from, there is something in the band’s discography. I enjoy everything they’ve done to some extent.

I always enjoyed Barren Earth’s Amorphis-influenced progressive metal, but I feel that the band really came into its own when Faroese vocalist Jon Aldara joined the band. Kickass mix of progressive, melodic and folk metal.

Before disbanding all his projects and starting Wolfheart, Tuomas Saukkonen had an array of bands. Before the Dawn was the most melodeath sounding and a quality take on the style, despite not being one of my favorites

Speaking of Tuomas Saukkonen projects, here is my favorite. Black Sun Aeon’s debut is a dark take on melodic death/doom metal with fantastic clean vocals by Mikko Heikkilä. The rest of the albums are also quality Finnish metal music.

Classic early 90’s death metal band that made a comeback effort recently. Very murky and unconventional, like much of the Finnish death metal from the time period.

Fairly unknown band with a mix of death/doom metal and lighter doom metal that should please fans of Katatonia.

Saukkonen project #3 is another doomy one, similar to Black Sun Aeon. It’s not as good as that project, but 2006’s “The Darkness” is still a quality death/doom album worth checking out.

Finland’s answer to Bolt Thrower and Asphyx release quality war-themed death metal albums quite frequently. Certainly an anomaly on this list, but wotth checking out if you enjoy the music style.

Another mandatory death metal band featuring technical guitars and unique vocals described as “frog sounding”, which isn’t really all that off.

Desolate Shrine is mercilessly dark and ominous-sounding, bordering on death/doom at their slowest.

All-star doom metal project featuring members of Swallow the Sun, Amorphis and HIM. Solid songwriting and a distinct enough to style to separate Hallatar from countless other Finnish bands in the same genre.

As close to Opeth as you can get in Finnish metal music. Combines atmospheric-sounding death and black metal with familiar progressive songwriting.

It’s impossible to talk about melodic death metal from Finland without mentioning Insomnium. The band has put out a shitload of above average albums, and the best ones are extremely good.

Not Finnish, but my progressive death/doom metal band Soliloquium might interest you if you’re into Finnish style metal, especially of the doomy variety. Please check out the song “Catharsis” below. All Soliloquium music can be streamed and downloaded on the Soliloquium Bandcamp page.

From one doomy “kuole” band to another. 2014’s “Tulijoutsen” is a pretty crazy album, mixing morbid Triptykon influences with classic Finnish death/doom stylings.

Read my review of “Horror Vacui” ->

A highly appreciated melodic death metal band with a solid discography. Mandatory listening for fans of Insomnium and Omnium Gatherum.

Not completely my music style, but I can appreciate the quality of Moonsorrow’s long, consistent discography.

I’m not the biggest Omnium Gatherum fan and I mostly tend to think of them as a lesser Insomnium. They’ve still managed to put some quality melodic death metal over the years, especially the song “Frontiers” which I really dig.

It’s fun when a band goes completely apeshit and still makes it sound good. Oranssi Pazuzu’s “Värähtelijä” was one of the most unexpected 2016 highlights for me. The band’s mix of free-form psychedelic rock and black is something else completely.

This band came out of nowhere and impressed me a lot. A very creative form of atmospheric black metal with a lot of, well.. atmosphere! “Riitti” is one of the most unexpected finds of 2018 for me. Totally worth checking out.

Progressive metal influenced by Opeth and Pink Floyd isn’t exactly what I first associate with Finnish metal. Pressure Points do a solid take on the style, however. Totally worth checking out for fans of the style.

Put Katatonia’s “Brave Murder Day” and catchy Finnish death metal in a blender. Rapture is pretty much what comes out. All three Rapture albums are filled Scandinavian darkness and superb songwriting. One of the best bands on this list and debut “Futile” is a given on my list of 10 essential death/doom metal albums.

The kings of Finnish grindcore is a given band on this list. I’m not a huge fan, but Rotten Sound has a solid discography.

Another quality pre-Wolfheart Toumas Saukkonen project. I don’t know how the man manages to write so much good music.

Very underrated band! Scent of Flesh’s 2007 album “Deform in Torture” is one of those death metal albums I never hear people talking about. It’s a very enjoyable slab of brutal death metal with catchy hooks and neat guitarplaying.

Another musical project of mine that you might like if you’re into Scandinavian Metal. Desolator is an old school death metal band influenced by Immolation, Blood Red Throne, Morbid Angel and Vader. Please check out the song “Illusions of Grandeur” below if it sounds interesting. All Desolator music is available at the Desolator Bandcamp page.

Sentenced went from nasty death metal to contemporary gothic metal, and most of the music is above par. “Crimson” is my jam, but I like the early death metal material too.

Solid symphonic take on melodic death metal. Not exactly my cup of tea, but I can see why this band’s popularity is growing.

Genre(s): Gothic metal
Recommended album: “Goodbye to All That” (2007)

Funeral doom metal is not really my genre of choice, but Shape of Despair is one of the best bands.

Swallow the Sun is a mandatory addition to a list like this. I’m not as big of fan of Swallow the Sun as most doom fans, but I still really dig the debut album and some other songs. “The Justice of Suffering”, featuring Katatonia’s Jonas Renkse on guest vocals, is a favorite of mine.

Very fresh and unknown band that continues the tradition of quality Finnish doom metal. I really liked what I heard on debut EP “Hollow”, and I hope there’s more music to come.

Genre(s): Progressive metal, progressive rock
Recommended album: “We are Left With a Song” (2016)

Probably the most underrated Finnish band for me. Thence delivered a ridicilously good album in 2016’s “We are Left With a Song”, a progressive metal/rock hybrid with a fantastic level of emotion and great songwriting.

Another underrated gem from the progressive side of things. Throes of Dawn have been playing since pretty much forever and they only seem to get better with every album. Diverse influences like Dead Can Dance and Pink Floyd are combined with melancholic metal to great effect.

Read my “Our Voices Shall Remain” review ->

Solid death/doom that lives up to the band name, because this sounds undeniably Finnish.

Read my “Constellation of the Black Light” review ->

Great list, man bands I don’t know, might have to check some of them out. Some of my favorit Finnish bands are Finntroll, Turisas, Ensiferum.