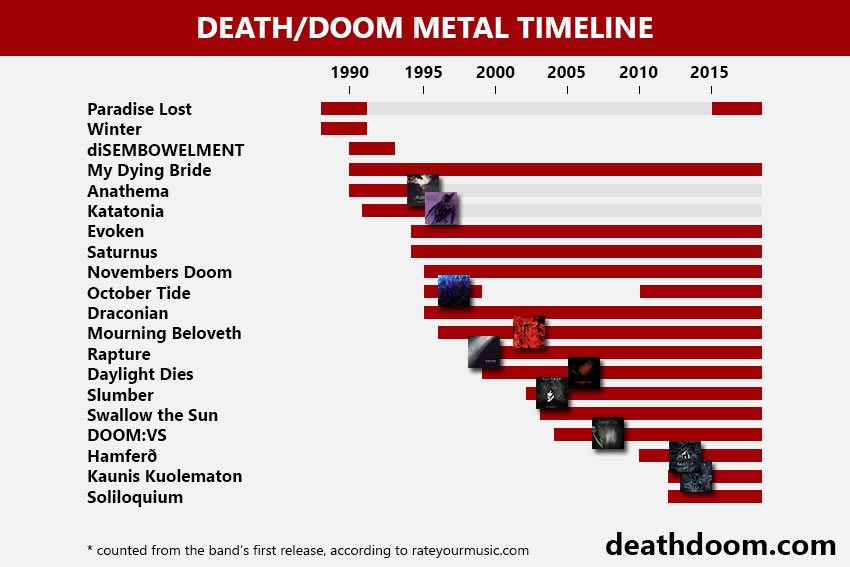 Despite being long-running, there aren’t that many bands (at least compared to death metal overall) that truly could be considered essential death/doom metal. This list is a mix of classic bands and promising new bands. I’ll try to keep it updated and include links. For the latest in death/doom music, see my list of death/doom metal from 2018. If you have a death/doom metal and you want me to check it out and/or review it, I would gladly do it.

My band Soliloquium plays a progressive style of death/doom metal. Our new full-length album entitled “Contemplations” is out in June 2018. All Soliloquium music is available for free from the Soliloquium Bandcamp page.

If you want to let the death/doom metal music flow instead of reading a bunch of text, just start up my YouTube or Spotify playlist below and lean back.

This is my full list of good bands that play death/doom metal. I’m probably missing out on some. If this is too massive for you, just head over to 10 essential death/doom metal albums for a smaller list.

Italian death/doom metal band with two full length releases. Not a top tier band, but certainly one worth checking out. I like the 2016 album “Head First into Shadows” slightly more than debut “Devoid of Illusions”.

Venezuelan band that released the full length “Inside Us All” in 2013. Solid death/doom metal.

Anathema’s early material is as essential as it is awesome. The debut is pretty good, but the important thing is to not miss out on “The Silent Enigma”. Check out the opener “Restless Oblivion” below to get an introduction to their death/doom style. Check out my top 10 Anathema songs for a guide to band’s whole discography including their clean vocal period.

Pretty good Swedish band that released albums under the name Apathy before changing it to Apathy Noir in 2016.

Another new band that released pretty good material, this one from Canada.

Melodic death/doom from Jordan with Dan Swanö support. Solid, albeit not as good as their countrymen next featured on the list.

International project featuring members from Eye of Solitude, Hamferð and Officium Triste. Expect sorrowful and majestic atmospheric metal. One of those superstar projects that really deliver the quality that is promised. Read my “Departe” review if you want to learn more about Clouds.

Atmospheric death/doom with shoegaze influences in the vein of Slumber and Enshine. Read my “Further Nowhere” review if you want to know more.

One of the now defunct pre-Wolfheart Tomas Saukkonen projects. A more traditional take on death/doom metal compared to Black Sun Aeon and Before the Dawn.

One of the best bands in the style. Released three amazing discs as well as a decent one before silently going into a hiatus. “Dismantling Devotion” is an essential album. One of the members continued making quality death/doom metal with Atten Ash.

Swedish solo project by a member of Draconian that plays slow funeral doom metal mixed with death/doom. The song “Dead Words Speak” is a highlight.

German band with a creepy approach to the genre. Very atmospheric. Read my review of “6 Anti-Odes to Life” to learn more about Doomed.

Gothic doom metal band with a long discography. “Arcane Rain Fell” is their highlight but most of their material is worth checking out.

Excellent post-Slumber project that has produced two quality albums so far. It’s fairly high in tempo and has some shoegaze influences that makes it wonderfully spacy.

Another post-Slumber project, this one international (Sweden and Colombia). A bit more aggressive and less spacy than Enshine. Quality none the less. New material is apparently on the way!

Funeral death/doom from Romania. A bit too slow for my personal taste, but certainly a quality band worth checking out.

Russian band that sounds like an incoming winter storm. Heavy on the keyboard melodies which gives it a symphonic touch.

Romanian band that is surprisingly unknown. I like their latest album “Wrong Roads” that I’ve reviewed here on the site.

Unique and fascinating band from the Faroe Islands mixing brutal growls and operatic clean vocals. Vocalist Jon Aldara is one of a kind and complement the classy music perfectly. Read my “Evst” review to learn more about Hamferð.

Spanish melodic death/doom metal. Released a stunning, professional music video for the song “Burden Me” that you can watch below.

Russian band with a traditional approach to the genre. Made a fantastic instrumental cover of Anathema’s “Dusk”.

Solid death/doom from Greece with a lot of atmosphere.

French band with a raw take on the genre. Unfortunately disbanded after its strongest album yet.

Finnish band that is surprisingly unknown. Mikko Heikkilä from Black Sun Aeon provides amazing clean vocals next to the melodic death/doom backdrop. Read my reviews of “Vapaus” and “Kylmä Kaunis Maailma” if you want to know more about the band.

Finnish project featuring Mikko Kotamäki from Swallow the Sun on vocals. The drony Triptykon feeling and Finnish vocal stylings gives them a rather unique sound.

Brazilian band that sounds like a solid mix between Daylight Dies and old Opeth; a progressive take on death/doom. Read my review of “From Presence to Silence” to learn more. 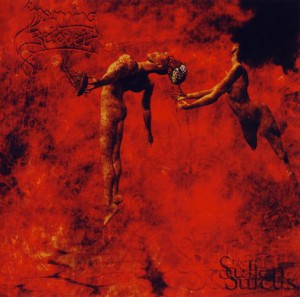 Irish band with a lengthy discography. One of the most epic sounding and bombastic bands in the genre. “Narcissistic Funeral” is one of my favorite death/doom metal songs and a perfect place to start out.

A genre giant that is hit and miss for me personally. I do like the album “The Dreadful Hours” a lot though. The length and average quality of the My Dying Bride discography is highly impressive.

Long-running doomsters from Brazil with a very melancholic sound. A bit surprised that the band is not more famous, considering their quality and consistency.

Italian band with an atmospheric approach. I don’t like all their releases, but “The Blue” and “Materia” are certainly strong death/doom metal albums. A bit different since they really aren’t that depressing compared to other bands in this list.

Another genre giant that doesn’t always resonate with me. “The Pale Haunt Departure” is their peak, and the newer stuff is hit and miss. Paul Kuhr is an excellent growler though.

Greek death/doom band that released their first EP in 2016. Traditional approach and solid songwriting. Improved upon the EP with full-length debut “Nightfall’s Lament” in 2018.

Released two 90’s classics comparable to Katatonia in quality. “Rain Without End” is a classic that you can’t avoid if when into this style of music. A good band after the comeback as well, while not retaining the same level of emotional impact.

Long-running Dutch act with many quality albums in their discography. “On the Crossroads of Souls” below is a standout track with an epic feel.

Good Australian death/doom with one album from 2012.

Early Paradise Lost is extremely important for the genre and formed the framework for others bands like Katatonia to build upon. They returned to their death/doom ways with “Beneath Broken Earth”, one of the band’s best songs ever. Check out my list of the 10 best Paradise Lost songs to learn more.

Finnish band that released three great albums before disappearing into obscurity. One of the catchiest death/doom metal bands, as well as one of the best.

Danish My Dying Bride worshippers with a strong sense of melody. They are the best on “Veronika Decides to Die”, but overall a solid band.

U.S. death/doom with a traditional “Brave Murder Day” based sound. The first EP “Hollowpath” came out in 2013 and more material is on the way.

Released the album “Fallout” before disbanding, which is the only album that can compete with “Brave Murder Day” for the death/doom crown. Connected to various projects inside and outside death/doom metal after disbanding: Atoma, Enshine, Exgenesis, Seas of Years.

My band Soliloquium plays a progressive style of death/doom metal that should please fans of the genre. Above is the song “The Sorrow Path” from the album “An Empty Frame”. If you like Soliloquium, you can download our music for free from Bandcamp, follow us on Facebook or stream us from Spotify

Origin: Czech Republic
Recommended album: “On the Shores of Oblivion”

I mostly like a song here and there by this band, but “The Justice of Suffering” and “Out of This Gloomy Light” are certainly death/doom classics. Read my list of the 10 best Swallow the Sun songs to know where to start.

New band by Sleepwalkers mastermind Mike Watts that released a debut EP in 2016. Terminus has a pretty varied and fresh death/doom sound.

British band that plays a raw take on death/doom metal. Both full-length albums are enjoyable.

The Ashen Tree is a new international death/doom metal project featuring musicians from India and Sweden. Debut EP The Ashen Tree was released on 3 November 2018. It’s available at The Ashen Tree Bandcamp. Check out the opening track “Memories in Monochrome” below!

The Fall of Every Season

Origin: Norway
Recommended album: “From Below”

Origin: Russia
Recommended album: “Through the Eyes of a Mad”

Russian My Dying Bride worshippers with a large dose of sorrow. “Since I Fell” is their most epic song.

Melodic death/doom metal from Karlstad, Sweden. Has released one full-length album and various EP’s and singles.

U.S. death/doom similar to Daylight Dies. Certainly worth checking out if you’re looking for music in that specific style.