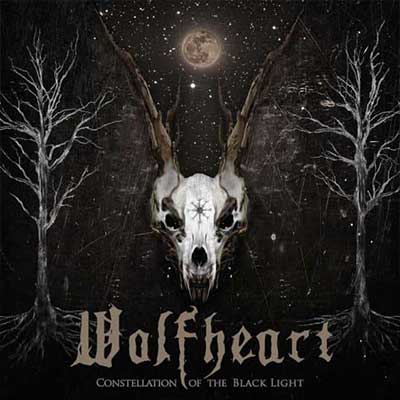 “Constellation of the Black Light”

Tuomas Saukkonen is one of metal’s most hard-working musicians. Wolfheart has managed to release four albums since he disbanded his array of musical projects in 2013. I was a big fan of his previous project Black Sun Aeon (check it out if you haven’t heard it), and Dawn of Solace and Before the Dawn delivered quality dark metal music as well. Most of his music is somewhere in between melodic death metal and doom metal, zoning in on the darkness that is present in so many Finnish metal bands.

Wolfheart’s releases have been somewhere in between the catchy Before the Dawn melodicism and the more heavy, emotionally driven sound from Black Sun Aeon. The debut album “Winterborn” is probably my favorite so far, even though all three releases are well over par.

The song “Breakwater” that was released prior to the album is a signature Wolfheart tune. Walls of blastbeat-fueled Finnish melodic death metal neatly cascades into lighter, atmospheric parts. It’s majestic, confident and catchy; right up there with previous Wolfheart singles like “Boneyard” and “Zero Gravity”.

10 minute opener “Everlasting Fall” is the longest Wolfheart song released so far. It has a three minute atmospheric opening that suddenly erupts in the familiar Wolfheart sounds; a growled verse accompanied by fast melodic tremolo guitars and blasting drums. The ambitious scope of the track is a new take. Some parts remind me more of Insomnium than Wolfheart ever previously did. However, it’s not as adventurous as 10 minutes entails though, it’s basically just a drawn out Wolfheart track, for good and bad.

In terms of guitar melodies and vocal hooks, the Wolfheart sound hasn’t changed much. It doesn’t have the freezing winter feeling that the first album had, but you can certainly tell that this album is from Scandinavia. There’s an underlying folkiness to the melodies and atmospheric parts. The keyboard presence is slightly stronger on “Constellation of the Black Light”.

The reliance is still on a backbone of melody driven guitar riffs and Tuomas’s vocals. In terms of vocals, nothing has changed. It’s still the same mid-range growls and rasps. They’re competent and deliver the hooks confidently, but rarely go beyond that. Some clean sounding choirs are added in the places in “Breakwater”. I find myself missing the extra edge that the clean vocals gave some of his previous projects. It’s not a big deal, but the variation would help.

The downtuned guitar tone packs a lot of punch. It’s masterful in the album’s stronger moments and fuels the less inspired guitar melodies. To me, Wolfheart has always been more of an atmosphere band than a riff band. It feels like the band is trying to bring some straight death metal fury at times and it’s not really what they’re best at. “Breakwater” and “The Saw” stand out as the strongest tracks, due to combination of Wolfheart atmosphere and memorable hooks.

Despite strong musicianship, my relationship with this band is based on its passion and character. There is a lot more to this music than the notes played on paper. I can see many non-Scandinavians fall for Saukkonen’s focus on snow, cold and other things Nordic. I find myself doing the same. There’s an intangible force of nature present in Wolfheart that I really like.

“Constellation of the Black Light” tracklist

As usual with Tuomas Sakkuonen’s projects, the production and musicianship is noticeably professional. Soundwise, this competes with the absolute metal elite. Drums and guitars sound massive and it really gives the album extra magnitude. To me, it’s no doubt that the massive production is a big factor in Wolfheart’s success.

To sum it up, “Constellation of the Black Light” is simply another quality album. This won’t turn around any Wolfheart haters, but it’s another solid addition to their discography. Saukkonen fans will like it. It will probably help them to win over new ones as well. I recommend this album to fans of melodic death metal and doom metal.

What are the 15 best Dark Tranquillity songs? The band has been around a long-time – here are my favorites from its vast discography. Let's count them down!