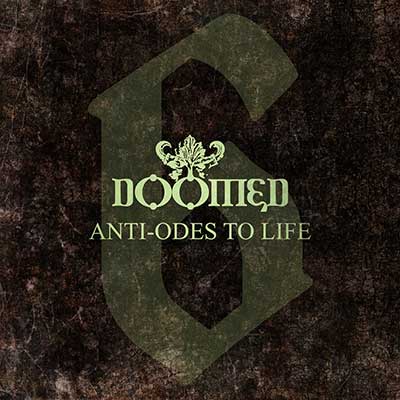 Death/doom metal is one my favorite genres. It’s also the one I play with one of my bands. I’ll be frank though: it isn’t one of the most original and innovative metal genres. There are many quality bands, but most of them follow the genre blueprints and expecations, at least to some extent. That’s why it’s fun when a band with a more crazy spin on it comes along. Doomed does just that on “6 Anti-Odes to Life”. It’s quite a ride, and if you keep reading I will tell you the specifics. This review is also available on rateyourmusic.com.

I remember listening to 2016’s fairly acclaimed “Anna” and not being terribly impressed. It wasn’t bad by any means, but it didn’t at all hit me as when I put on opening track “The Doors” from this album. Doomed is performing on a whole other level on this one. It’s more focused and it’s got a lot more personality and atmosphere.

The murky darkness on this album just immediately striking. There’s something otherwordly about the whole sound that goes beyond the notes that are being played. I think it has a lot to do with a great mix and even more with the usage of guitar tones.

Brilliant use of atmospheric guitars

Speaking of guitar tones, the utilization of clean guitars on this album is really cool. That especially goes for my favorite song “Touched”. There are alternations between distorted and clean guitars in many parts of the song that simply are to die for; they are as playful as darkly atmospheric.

I’d like to stay a while on the song “Touched”, because it’s a damn masterpiece. It lingers in murky, funeral atmosphere for over 11 minutes and I never get bored. It’s a very inventive track filled with dreary, theatric moments; everything from depressive voice samples to the guitar brilliance I previously talked about.

It’s not only the clean guitars that are packed with atmosphere. There are many simple, but very effective, tremolo leads on the album. It’s mostly standard funeral doom metal guitar techniques, but they are just placed so well in the overall sound. As you can see, the guitar arrangements are the highlight for me in Doomed’s sound.

These atmospherics wouldn’t be possible without a good sound mix, and “6 Anti-Odes to Life” definitely has that one covered. It escapes modern processing pitfalls and allows the extreme parts to truly be extreme while the atmospherics shine in a less intrusive fashion. I especially love how the clean and acoustic guitars sound in the overall picture.

The vocals are mix between low, ominous growling and pained cleans that are somewhat comparable to Johan Ericson’s performance in Doom:VS. They’re a good compliment to the mood of the creative guitar layers.

There are also compliments to be made about the drumming. Many of the beats are creative and the whole performance feels ceremonial in nature. The absence of lazy 4/4 beats is appreciated. “Our Gifts” opens up with a tribal part that even reminds me of the Polish progressive rock band Riverside. These musical left turns give the album much more value on repeated spins, and there are quite a few of them.

No review, especially a doom metal one, is complete without some criticism. I think my biggest issue is that “The Doors” and “Touched” are a bit too superior to the other tracks. “6 Anti-Odes to Life” is, after all, over an hour long. I think this won’t be an issue for most doom metal fans though, since, I’m a bit more picky about long albums.

This album is a huge step up from the previous one and it makes me happy to hear that this much originality still exists in death/doom. I’d say that “6 Anti-Odes to Life” is an album that most doom metal fans would appreciate.