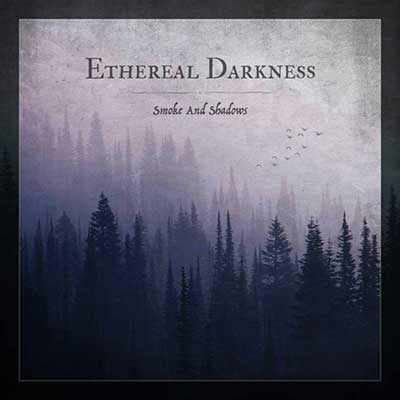 Quality death/doom metal and melodic death metal projects seem to be popping up everywhere right now. According to me, it’s both positive and negative. On one side, there is so much music exploration to do in some of my favorite music styles. On the other side, many of these bands are merely competent without delivering that special something.

Which side is new project Ethereal Darkness on? Let’s explore the band’s debut album “Smoke and Shadows” and find out.

From the first few notes, I immediately hear a lot of Insomnium and other Scandinavian bands. There is a majestic sorrow to the Ethereal Darkness sound and I find myself drawn in by the many good melodic lead guitar lines. I’m really impressed by the guitar play and composition on “Smoke and Shadows”. The songs tend to ebb and flow rather than go for big hooks, something that can sink an album if it’s done wrong.

In this case it really works. It reminds me of the way I was listening to Ocean of Grief’s excellent “Nightfall’s Lament” album last year. “The Light that Fades” is probably my favorite song on the album, but I found this album most effective in a full listen. It also avoids overstaying its welcome. Some bands in this style go for extreme playing times. This is around 50 minutes, which is perfect for the style at hand.

Vocally, we’re treated to a mix of extreme vocal styles. There are high, mid-range and low vocals as well as the occasional whispery sound. I wouldn’t really say that the vocals are the focal point of the music. For me they rather serve as a compliment to what’s going on in the flow and melodies of the different songs. The production job is solid and also focuses on accenting the strong guitar ideas.

1. Rivers
2. The Dreaming Soul
3. Forgotten Shadows
4. The Light that Fades
5. Apocalypse in Your Mind
6. Shrouded in Mourn
7. Time
8. Flow into the Sea

Is this really a debut?

Many things about “Smoke and Shadows” makes me feel like it’s not a debut album at all. Everything from the mature composition style to the solid production gives the impression that this band really knows what its doing from the start.

Even though there is nothing remarkably original on display, the songwriting is strong enough to carry the album at all times. Fans of both doom metal and melodic death looking for more music should find something to enjoy here. Very strong debut. I’m hoping to hear more from Ethereal Darkness soon!