Published by soliloquium on January 30, 2019 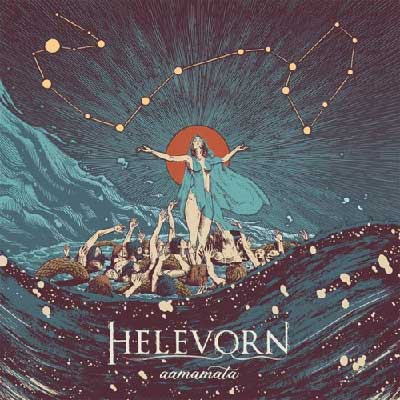 Spain’s Helevorn are on album four of their Gothic-influenced take on death/doom metal. 2014’s “Compassion Forlorn” is the strongest album so far from them in my opinion, fueled by massive video track “Burden Me” and epic closer “Els Dies Tranquils”. It’s not an easy album to follow up. Let’s see how well the band succeeds with “Aamamata”.

Pre-release single “Blackened Waves” amazed me immediately. It’s in the same league as previous singles “Burden Me” and “From Our Glorious Days”; an absolutely gorgeous song. The song has a sympathetic theme, concerning the many fugitives trying to cross the Mediterannean sea, and the terrible realities many of them face. Simply casting the shame on humanity without becoming political really is a very good and, not to mention, sympathetic topic for a doom metal song. It really hits in the right spot.

The opening track “A Sail to Sanity” has similar humanistic, yet dark themes, revolving around war-stricken civilians. Down-to-earth lyrics always go down well with me, and this is no exception. Helevorn tells true stories about a humanity I also see. It really gives an extra dimension beyond the many beautiful guitar riffs and vocal lines. These two songs are the standouts, but I like all of the songs on the album.

“The Path To Puya” is also worth mentioning, as it ends with a guest spot by Draconian vocalist Heike Langhals. This is a welcome nod to closer “Els Dies Tranquils” from the last album that featured Lisa Cuthbert, who coincidentally did some live vocals for Draconian. Reference aside, it’s also a damn melancholic and soulful guest performance that plays well against the band’s heavier side.

Just like on previous Helevorn records, the band’s main focus is on crafting effective songs. It’s often very simple music technically, but damn do they make every note count. The big, dramatic power chords and lingering melodic lines fit perfectly with the decaying world that’s portrayed in songs like “Blackened Waves”. “Blackened Waves” is also one of the band’s most clean vocal driven songs so far, but it doesn’t stop it from feeling like an absolute beast thanks to the heavy theme and atmosphere.

Speaking of vocals, Josep Brunet is one hell of a singer. He’s got the two necissary voices for melodic death/doom in his arsenal; a powerful growl and a melancholic clean voice. I feel like there is slightly more clean vocals on “Aamamata” compared to the older material. This is welcome, because I really like his voice. Some of the clean vocal parts remind me of Italian gothic metal masters The Foreshadowing, both because of Josep’s baritone delivery and the way the melodies are constructed.

Production-wise, this album has a really big sound. Helevorn is a dramatic-sounding band, so I am glad they went for a sound that highlights it. The rhythm guitars have a massive sound and there is also plenty of space for the melodic leads to shine. It’s the finishing touch on a very competent musical package.

Overall, this is a really good album that will be among my doom metal favorites of 2019. The last Helevorn album, 2014’s “Compassion Forlorn”, was a real asskicker and my favorite in the band’s discography. “Aamamata” doesn’t quite reach those heights, but it’s still a damn good death/doom metal album. The down-to-earth themes along with the obvious passion and attention to detail makes Helevorn one of the best active bands in the genre today.