Trees of Eternity – Hour of the Nightingale review 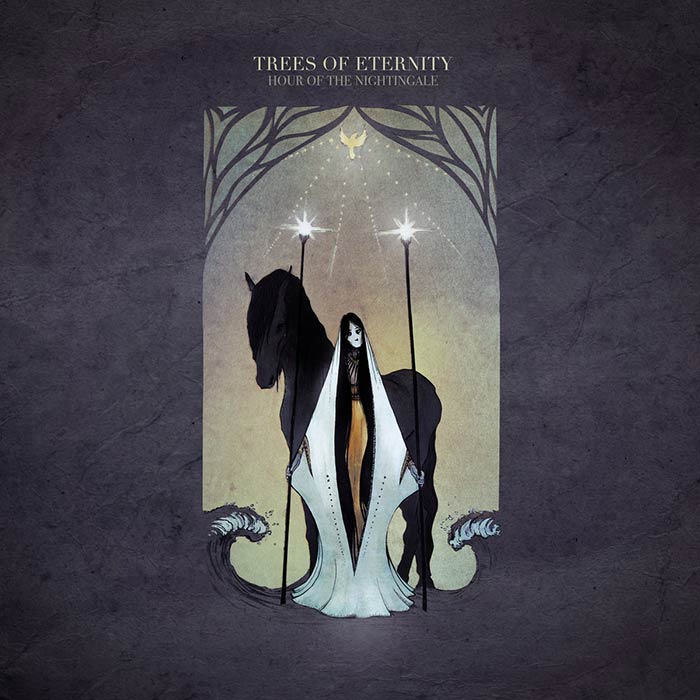 Trees of Eternity is a project by Swallow the Sun guitarist Juha Raivio and female vocalist Aleah. They are joined by a couple of familiar doom metal names: the Norrman brothers from October Tide and Swallow the Sun’s Kai Hahto. Aleah tragically passed away, which makes this their debut as well as their swansong. This review is also available at rateyourmusic.com and Metal Archives.

Swallow the Sun, but lighter

Unsurprisingly, the music sounds a lot like Swallow the Sun. It’s a lighter take on their signature melodic doom sound with a strong focus on clean guitar parts. The production values are light and airy, which makes the album feel even less heavy in comparison. Even the few parts with rhythm guitar chugging wind up sounding more atmospheric than heavy. Many of the clean and acoustic guitar parts are immensely beautiful, and I find myself liking the music more the mellower it gets.

Aleah is the focus

It definitely feels like the instruments are holding it back and playing it simple to make room for Aleah’s voice, which is a wise choice. She really has an angelic and unique voice that sets the project apart. Most female vocalists in this type of music tend to sing in an overblown gothic fashion. Aleah uses more of a soft alternative rock approach. Her voice is calm and ethereal, gently playing off the music’s melancholy rather than aiming for maximum force.

The closest comparison I can think of are the soft clean vocals in French doom metal band Lethian Dreams. The album also features guest appearances by two great vocalists: Mick Moss and Nick Holmes. Both of them fit right in. Mick Moss follows his Antimatter style, while Nick Holmes goes way more gothic than usual.

While the music is similar to clean vocal Swallow the Sun, this is just simply better. First off, Aleah is a more immersive and unique vocalist than Mikko Kotamäki. He never really struck me as a great clean vocalist, and hearing Aleah navigate similar musical landscapes like this proves it to me even more. It’s also a matter of the melodies feeling more down to earth and engaging. Where Swallow the Sun tends to have a bit too much pretentious, calculated melodrama for my taste, Trees of Eternity strikes me as more genuine. This just has a subtlety that gives it much more grace. Less is simply more.

“Hour of the Nightingale” feels like one long song

The songwriting is quite streamlined, and most songs feature memorable chorus lines. There are no obvious hits; “Hour of the Nightingale” feels more like something you listen to as a full unit. It never feels like an album that clocks in at over an hour. The melodies are so strong that it doesn’t matter that all of the songs are in similar tempos. It feels like one big, glorious dirge. It’s really one of a kind too, as this lighter type of doom metal often features a lot of overdone gothic drama. All this adds up to an album that certainly needed to be released, no matter the tragedy surrounding it.