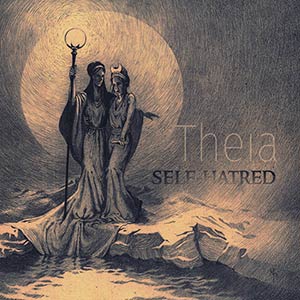 I came across this band while checking out the many death/doom metal releases from 2016. Self-Hatred is a Czech band with a strong focus on atmosphere. The competition in the death/doom field seems to get tougher by the day, with new acts popping up everywhere. It’s becoming a game where you have to do more than simply rehash “Brave Murder Day” to succeed.

As I said earlier, the focus on “Theia” is generally on creating atmosphere. One band I would compare in terms of pulse is Holland’s Officium Triste, but this has more a funeral doom edge musically. The landscapes are bleak and discouraging. I do feel that the emotional impact could be bigger, since there isn’t really that much going on in terms of hitting the listener. This is a dulling album, rather than a evocative one.

The bleakness is accentuated by a sludgy production job that evens things out rather than creates dynamics. Even though the band picks up the pace with a blastbeat part here and there, it rarely becomes energetic. It works both ways though, because the hypnotic factor makes it play well as a full album.

Guitars are basic and usually play open power chords or 4/4 rhythms. 4/4 rhythms aside, it’s almost notable to hear new death/doom so devoid of “Brave Murder Day” influence. Instrumentally, this sounds more like funeral doom in a slightly higher tempo. This is also true for the keyboard and organ parts, which have a strong funeral doom influence.

I especially hear a lot of Skepticism in the organ sound. The keyboard presence is a positive part, since it gives the basic guitar progressions some necessary extra bite. I’m not really that big on the usual funeral doom deal with 18 minute songs, so the 6-7 minute compositions on “Theia” work better for me.

Vocals are a combination of low end growls and Agalloch-style black metal vocals. There are also some funeral doom styled choirs present. The vocals do the trick, but I would’ve liked some more hooks in the songs. Overall, they tend to match the brooding music without really leaving any impression of their own.

I guess this won’t be a problem for most doom enthusiasts though, since it’s rarely a genre you listen to for big choruses. Don’t get me wrong, I’m not asking for arena rock here. However, having a few strong growl phrases pop up in my head would be nice.

The focus on “Theia” is undeniably to go all in on atmosphere. The result is a decent death/doom metal album that comes across as competent without being extraordinary. Pretty good for a debut. It will be interesting to see where the band goes on from here. There is certainly potential for good things in the future.