Katatonia – The Fall of Hearts review (and 2017 revisit) 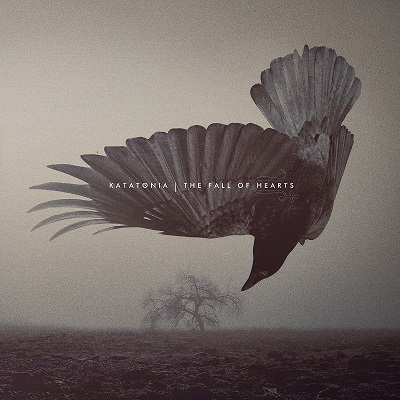 This article is a combination of my original “The Fall of Hearts” review, also available at rateyourmusic.com and Metal Archives, and my follow-up track by track analysis.

I was perplexed the first time I heard this album. Katatonia has been favorite band for over 10 years, but “The Fall of Hearts” just didn’t click. Opener “Takeover” presented vocal lines that felt almost forcibly awkward, as well as an equally strange song structure. The “Forsaker”-like heavy chorus in “Old Heart Falls” felt anything but “Forsaker”-like in terms of impact. “Serein”, the second lyric video released after “Old Heart Falls”, also left me very cold.

For a while, the only songs that felt interesting were dynamic, Opeth-inspired “Serac” and post-rock closer “Passer”. Since I was in a similar struggle to understand Deftones schizophrenic new “Gore” album at the same time, it was a frustrating time as a music listener. I mean, this was the period where two of my favorite bands were supposed to cement themselves in the top of my 2016 list. However, after twenty spins or so, the album started clicking.

I suppose two reasons made the album such a grower. Reason one is that Jonas Renkse certainly tried to make the vocal lines more twisted, something that feels like a concious decision. We are rarely treated with the radio rock simplicity found in “My Twin”, “Teargas” and “The Longest Year” on this album. It’s very awarding to finally get a song like the dwelling, moody “Residual” in my head; a place where it certainly wasn’t during my first twenty spins.

“The Fall of Hearts” also has a very long running time: 67 minutes without the three bonus tracks. The calmer songs like “Pale Flag” and “Decima” really made it drag, since the heavier songs on here aren’t exactly extreme. It’s definitely a less intense album compared to “Dead End Kings”, which had a few driving numbers like “Buildings” and “Lethean”. The focal point here is mood and atmosphere, even more so than on previous Katatonia albums.

What I was describing earlier about “Residual” is an overall factor that I now enjoy a lot about “The Fall of Hearts”. Most songs are moody both lyrically and musically, which allows for more unexpected turns compared to the last two albums. For instance, closer “Passer” goes from a cold, bitter first verse to a bursting post rock ending, and manages to squeeze in a lot of instrumental dynamics on the way as well. “Sanction” combines warm summer longing in the verses with a heavy Tool-inspired chorus where Jonas really gets to exercise his vocal chords properly.

There are some more conventional Katatonia cuts on here as well. “Old Heart Falls” is deservingly the main single, as it has every ingredience: the signature sorrowful lyrics, goth metal atmospherics and a big chorus. “Shifts” is the best calm song on the album, and recently got rewarded with a complimenting music video. Jonas delivers some chilling lower vocals in it that displays his ongoing growth as a singer.

Speaking of Jonas; he sings flat out amazing on this album. It seems that he gets more present and daring with every new Katatonia release. Age only seems to do him well, as he often goes for a lower register that sounds more comfortable. In terms of guitars, this is what we’ve come to expect from Katatonia: the distorted parts are often similar to other prog giants like Opeth and Tool, and there are plenty of clean and acoustic sections with great tone and emotional impact. The rhythm section is busy, especially in the heavier parts.

There will definitely be those claiming that “Night is the New Day”, “Dead End Kings” and “The Fall of Hearts” are essentially the same album. I claim there is a substantial shift in songwriting technique on display here. This moody version of the Katatonia sound is, in it’s increased weirdness, something that feels both confident and adventurous. This album as a whole doesn’t reach the extreme heights of their best works, but it’s certainly a great addition to their discography.

Update: 2017 “The Fall of Hearts” revisit – track by track analysis

It’s been over a year since Katatonia’s “The Fall of Hearts” album was released, and since it’s been a huge grower, I figured a track by track analysis would be an interesting thing to do. My initial reaction to most of the tracks was, as I wrote about in my original review, confusion.

Many of the song structures and vocal melodies on this album are a curveball. It took me 30+ spins to gain appreciation for some of tracks, but at this point I finally feel like I “got” the album. Now it’s just another great Katatonia album for me, and I need them to write a new one for me to digest. “The Fall of Hearts” is number 7 on my best Katatonia albums list.

“The Fall of Hearts” tracklist:

“Takeover” had a lyrical summer sentimentality that I could relate to in a fairly early stage, but the song is awkwardly structured. Its mix of lighter clean parts and Tool-inspired distorted guitar moves does get there after repeated listens. An unconventional opening track choice, but it’s certainly a good song.

I didn’t love this track at first, and I think it was because it’s so instrumentally basic. There is not anything special going either in the guitar or drum department. The vocal melodies are brilliant though, and finally got me in due time. The strong focus on the vocals reminds me of “The Great Cold Distance”.

By far the song I’ve listened to the most from “The Fall of Hearts”, and with good reason. This is a staple track, with an extremely strong emotional impact and great melody hooks to match. Probably one of Jonas Renkse’s strongest vocal performance; he sounds almost transparently sincere in this one.

As beautiful and finetuned as this ballad is, it’s still one of my least favorite songs. The acoustic guitars and the vocals are nice, but it still feels like the album loses some pace here. Lacks something that truly stands out.

A dynamic, moody track that caught me pretty fast, thanks to its trippy verses. I don’t love the heavy chorus, but the verses have a feeling best described as a combination of the summer melancholy of “Takeover”, and the Stockholms darkness of “Hypnone” from the “Dead End Kings” album.

“Residual” is as Tool as Katatonia ever sounded, and the biggest grower on “The Fall of Hearts”. It took me at least 20 spins to realize that this track isn’t a roadblock. It has a fantastic tension that explodes in the heavier parts towards the end. Jonas also delivers a varied vocal performance that fits the song’s brooding nature.

One of Katatonia’s most musically impressive songs to date, with great dynamics and breathtaking individual parts. Some of the vocal lines have a distinct Opeth influence, and it’s nice to hear how much Jonas is still growing as a vocalist. It’s not one of the more emotionally affecting songs on the album, but I find myself in awe of it from a musical perspective every time I listen to it.

Last Song Before the Fade

A direct track with nice hooks and drive. One of the most immediate tracks on “The Fall of Hearts”, and it’s no surprise that it’s been used as an opening track on many of their gigs. The calmer part around the 3 minute mark is also a perfect breather before it goes back into high gear.

“Shifts” is a straightforward, mellow track that was released a music video. It was one of my initial highlights, but it hasn’t grown for me that much, despite remaining a quality Katatonia track.

This song felt like “Last Song Before the Fade” light for a while. I didn’t quite realize the power of this song until I saw it live. Today I feel it’s a bit stronger than its counterpart, thanks to a more intriguing song structure and use of melody.

An acoustic ballad that I feel the same about as “Decima”. It’s a slightly better one, but it’s jammed in between two great songs on a long album. Given the high standards of Katatonia, it’s still a good one, but it makes the album lose its pace a bit.

My intial favorite on the album, that remains in the top 3 together with “Old Heart Falls” and “Serac”. This sees Katatonia taking a dreamy, post metal direction at times, with gorgeous results. The ending minutes or so of this track is probably my favorite part on the entire album, so I’m glad to see they’ve added it to their live setlist. I got to see it in their gorgeous gig at Metaldays 2017.

The bonus tracks are great too

“The Fall of Hearts” comes with three bonus tracks: “Wide Awake in Quietus”, “Sistere” and “Vakaren”. I especially fell for “Vakaren”, the first Katatonia song in Swedish. It’s a light tune with nice effects and electronics where Jonas really shines. It’s quite different to hear him singing in Swedish, in a very good way.

“Wide Awake in Quietus” is also a nice one. It sounds more like the regular album tracks on “The Fall of Hearts”, and has a nice melodic drive to it. Katatonia have been famous for their bonuis tracks among their fans, and this time is no different. You can see my 5 favorite Katatonia b-sides and bonus tracks in my article.

“The Fall of Hearts” is a true grower

“The Fall of Hearts” grew on me bigtime, much like “The Great Cold Distance” before it. It’s interesting to analyze an album in this stage, and there is certainly so much more to say compared to an initial review. If you enjoyed this article, I’d love if you shared it on Facebook or Twitter or wherever you do your social media activities.