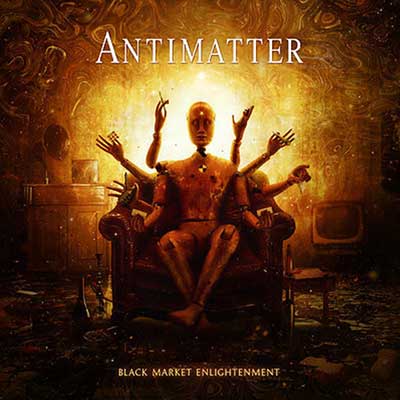 The wait for this album has been a long one. Antimatter is one of my favorite bands, and 2015’s “The Judas Table” was one of my favorite albums from that year. Mick Moss has a unique ability to dive into the darkest corners of the human condition. From the autumn depression of “Planetary Confinement” to the social commentary of the last two albums, he always seems to articulate important things that I personally think a lot about.

“Black Market Enlightenment” was hinted as a journey into the darkness of drugs and addiction. This made me excited, because it should fit Mick Moss dark rock writing style perfectly. He’s not afraid to touch upon sensitive topics and he has a very mature way of applying his own sense of existentialism to them.

“Black Market Enlightenment” opens with video song “The Third Arm”. It’s a relentlessly dark song with a suffocating atmosphere. Darkwave electronics and progressive rock elements are combined masterfully. Mick’s voice sounds more impressive than ever, and it feels like he’s coming more and more into his own as an artist. The gorgeous music video confirms this, as it is a perfect counterpart to the song’s dark lyrical content.

The tendencies from the opening track continue on the rest of the album. There’s a wider blend of instruments and aesthestics on this, compared to the last few albums. Previous albums all had a sense of musical perfectionism when it came to the arrangements. This album also gives me the feeling of an increased musical confidence. Mick is definitely not afraid to push Antimatter’s music in various directions, when called for.

Everything just feels so in place and meticilous in a musical sense. At the same time, the genuine emotion is not lost. Quite the contrary; the central part of this record and Antimatter overall is that it really hits home. It’s not easy to dissect yourself like this and come out with quality music that makes sense. I simply feel genuinely interested in the topics at hand.

Musically, “Black Market Enlightenment” is a slighly heavier album. Distorted power chords drive many of the songs, and the clean guitar moments are fewer than usual. Electronics have replaced some of the clean guitar presence. This time, much more of the album is based around combining dark electronic sounds and distorted guitars. It’s not a metal album by any means, but it’s certainly noticeably heavier.

Strong interplay between guitars and electronics

Some of the electronic sounds actually harken back to the days of “Lights Out”, which should be a pleasant surprise for many long-time Antimatter fans. It feels natural and gives this album a different sound compared to the last few albums. The production is another thing that is very meticilous about this record. It’s very well mixed, not allowing electronics or rock instruments to take over.

The vocal performance from Mick Moss is also worth mentioning. Unsurprisingly, he sounds great as usual. He has his traditional, raspy tone and many of the vocal melodies are instantly memorable. “The Third Arm” is my favorite song on the album, but the album is packed with strong hooks and emotional goosebumps. “Partners in Crime” and “Wish I Was Here” are two other early highlights.

Honestly, I really can’t find anything to criticize. Antimatter is one of my favorite dark rock bands and “Black Market Enlightenment” is yet another fine album. I just hope they keep releasing music this good. This will be high on my albums of the year list for sure.

Thanks for the review. I just listened to the album and I agree with everything you said. By style reminds me of Riverside and, at times Porcupine Tree…