Monstrosity – The Passage of Existence review 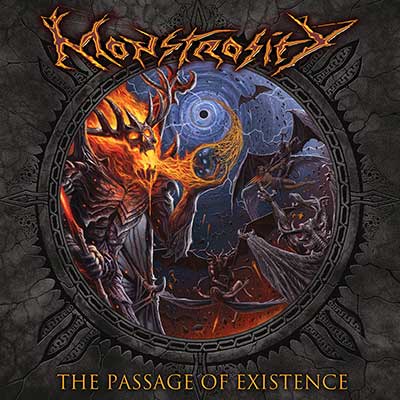 The last Monstrosity album ”Spiritual Apocalypse” is a big favorite of mine, and they sure took their sweet time (11 years!) finishing ”The Passage of Existence”. It’s a record I have high expectations of. Unrealistically high perhaps. The only thing that would really be enough is a Monstrosity take on Immolation’s fantastic ”Atonement” album. Does ”The Passage of Existence” reach any of these heights? Let’s find out!

Right as opener ”Cosmic Pandemia” kicks off, we know the band means business. This was the first song they released prior to the album and it’s a killer filled with technical riffing and brutal growls. It reminds me a lot of ”Spritual Apocalypse”, which is a great thing.

This album is notably rhythm and drum-driven, just like its predecessor. Drummer Lee Harrison’s strong involvement in the songwriting is noticeable. It really brings an extra dimension compared to many similar death metal bands.

Lee’s drumming is also as creative as it is proficient. There are loads of fills and shifts beyond the expected, which harmonizes well with the technical guitars. I don’t drum, so it’s something truly extraordinary when I notice the drums like this.

Guitars range from thrashy, thematic tremolo riffs to lead guitar wizardry. There are more solos on this than on “Spiritual Apocalypse” and they are a bit more indulgent. However, Monstrosity rarely loses emphasis on the songwriting. The band continues to be one of the best songwriters in the technical death metal genre.

The vocal hooks are not as strong as on the previous album, but the guitar hooks are very strong. Monstrosity are not afraid to make it simple and catchy when applicable and it really helps. Many of the main riffs are instantly memorable.

Stylewise, Monstrosity does play a very traditional take on U.S. death metal. There is no twist, they just do it so damn good. I was worried that they would lose their fire over the years, but that’s not the case. “The Passage of Existence” is a logical continuation of the “Spiritual Apocalypse” sound.

Criticism could be made that they haven’t progressed very much and it is true. It’s the reason why this won’t surpass the previous album. The album’s long length (58 minutes) also takes some momentum out of this type of death metal, despite the songs being good.

Before I stop reviewing and let you return to your life, there is one thing left to mention; the vocals are absolutely vicious! This is no news to anyone who has heard “Spiritual Apocalypse” but it still needs to be said. Mike Hrubovcak is one of the best growlers out there and carries a filthy arsenal that mixes very deep growls with high snarls.

How Monstrosity still has such a strong association to once having Corpsegrinder in the band feels a bit silly. These last two albums clearly show that the band’s time is now. And that really is the biggest compliment death metal veterans like this can receive.

Death metal from 2022 – all the new death metal albums

Immolation has been a favorite of mine for a long time, and I decided to go through all the Immolation albums in chronological order to see where they stand. Some albums, like “Here in After” Read more…