Listing the 20 best death metal vocalists is not an easy deal. On one hand I’m a fan of many different styles and eras, on the other hand it’s very hard to compare charismatic legends to savvy modern growlers. Hence, this is a highly subjective piece. Just like my recent list of the 100 best death metal bands, this is bound to raise some eyebrows, and I’m OK with that.

Some criteria for listing the 20 best death metal vocalists are:

And of course, level of aggression and how visceral the vocal delivery is.

Before we start counting down death metal vocalists, here’s a nice little piece of self-promotion: if you like old school death metal you should check out my band Desolator. We’re a mix between Swedish and American death metal bands that fits fans of both styles equally.

I’ll just smack in our song “Portal Tomb” from the 2020 album “Sermon of Apathy” below so you can take a look. If you enjoy it, check out all our music on Bandcamp or Spotify, or follow the latest news by liking us on Facebook.

Malevolent Creation’s “Eternal” album was one of the first death metal albums I enjoyed. Unlike most classic Malevolent albums, that one actually features bass player Jason Blaczowicz on vocals. And this guy has one of the best classic American-style death metal growls for sure. I also like what he did with the underrated band Divine Empire.

If you’re looking for a Swedish growler from the new school, Alexander Högbom is probably the best choice. Right now, he’s providing kickass growls for melodic death/doomsters October Tide and old school death metal band Demonical. One of Alexander’s big selling points is that his high screams are just as on point as his brutal growls.

Hate is a non-stop menace high-velocity band that I really enjoy when I’m in the mood for it. And Adam’s vocals are a big part of that velocity. He’s got an absolute massive tone that’s a perfect for Hate’s über-intense music.

When it comes to classic Swedish death metal, few singers do it better than Jörgen Sandström. He sounds gruesome as fuck on the old Grave records, and I really enjoy his performance in 2000’s tongue-in-cheek project Torture Division too.

Monstrosity’s “Spiritual Apocalypse” is one of those death metal albums I would bring to a deserted island, and Mike Hrubovcak’s vocal performance is a big part of it. Just like Alexander Högbom on number 19, Mike delivers both brutal low growls and high screams equally well.

Peter Tägtgren’s biggest pro-argument is no doubt his massive range when it comes to pitch. He’s able to go very low, yet his high screams are some of the best in the business. It was very interesting to hear his one-off performance in Bloodbath in comparison to the mostly melodeath stuff he’s done with Hypocrisy.

The performance proved him a solid death metal growlers, but more than anything it showed the world how absolute insane his high screams are.

When it comes to death/doom metal growlers, cases could be made for both Novembers Doom’s Paul Kuhr and Swallow the Sun’s Mikko Kotamäki. But my favorite is a less known one: Rapture’s Henri Villberg. He’s a wildcard that most people haven’t heard of, and also inactive when it comes to extreme metal (as far as I know), but he has one of the best death metal growl tones I have ever heard to this day.

Sadly, this list doesn’t include combined harsh/clean vocal abilities in this list, because then Jón would be way higher. But even solely as a growler, this multi-talented Faroean deserves a top 20 spot. He’s got a very controlled low end, and powerful high screams to go with it. Not to mention Hamferð’s apocalyptic, mystical music is the perfect backdrop for it.

It’s impossible to make a list of the best death metal vocalists without having Martin van Drunen as the Dutch representative. For this high-pitched style of death metal vocals, there are two experts for me: van Drunen and, of course, Obituary’s John Tardy. While I enjoy John Tardy immensely, I think that Martin’s vocals are just more menacing and visceral.

I’ve struggled with where to place Corpsegrinder for several reasons. Tone-wise, he’s one of the most insane death metal vocalists, no doubt. But I also feel that Cannibal Corpse, while consistent, simply isn’t one of the absolute best bands.

And my second also stems from the fact that I prefer more serious vocalists and lyricists, compared to the tongue-in-cheek gore that drives Cannibal Corpse. Still, there’s no denying that Corpsegrinder has one of the most powerful voices out there, both low- and high-pitched.

Around the mid- and late-2000’s, Benighted was one of the bands I listened to the most, regardless of genre. And Julien’s vocal performance is a big part of why the band sounds so intense. The guy can pretty much sing any way he wants within the extreme metal spectrum, and he isn’t afraid to do so. Variation (not to mention great hooks!) is key when playing music as brutal as Benighted’s, and Julien nails it.

Vader is mostly praised for its consistency, but I must say that I really enjoy Piotr’s unique, Polish-accented screams. Just like the band, his voice just seems to keep going like a battle-tank. Another argument for Piotr, if needed, is that he (as well as Vader overall, for that matter) really delivers live.

I may be colored by how much of a favorite band The Crown has been to me over the years, but I really enjoy listening to Johan’s voice. He’s got an awesome Swedish edge to his articulation, complemented by a rock n’ roll attitude that not many other singers on this list bring to the table.

And of course, he performed on “Deathrace King”, one of the most obvious five-star death metal albums in my book.

When it comes to being insane- and visceral-sounding, few death metal vocalists can complete with Chris Reifert. Many bands have tried to capture Autopsy’s vibes, especially from the exquisite first two albums, but pretty much all of them have failed. I think the vocals are a big reason for that.

Frank Mullen is not only the original brutal death metal vocalist to me, his early output is intense, visceral and psychotic-sounding AF. His performance on “Pierced from Within” is especially stand-out, making it the legendary five-star record it is to me. Overall, I love his tone, and he’s also very good at writing hooks and variations that support the songs.

Technical ability and polished edges aside, few things are more awesome than a proper old school Swedish death metal growl. When it comes to sounding menacing and insane, few screamers surpass Matti’s performances on the early Dismember records. He literally sounds like he’s murdering someone, which of course fits the deadly chainsaw guitar riffs going on in the background.

Mikael may not growl in the studio anymore, but his early growls were insane. His performances on Opeth classics like “Blackwater Park” and “Deliverance”, along with Bloodbath’s “Resurrection through Carnage” and “Unblessing the Purity” remain some of the strongest I’ve ever heard. His tone just massive and menacing, really. Not bad for a progressive rock guy.

The argument against Mikael is that he lost his edge after 2008, even if he delivers some pretty good live growls now and then.

Chuck may not be one of the most brutal death metal vocalists ever, but he’s definitely delivered some of the most memorable performances in the genre. Firstly, his youthful, all-in delivery on “Scream Bloody Gore” and “Leprosy” influenced thousands of coming death metal singers. Secondly, I really enjoy his lyrically and structurally refined performances on albums like “Human” and “Symbolic”.

The only valid argument I see against Chuck is the slightly hoarse and over-the-top performance on “The Sound of Perseverance”. But I’m definitely willing to look past that, as he didn’t really want to make a death metal album in the first place at that point.

Amorphis may be considered a vanilla band by some death metal fans, but there’s no denying the power of Tomi’s voice. He has an amazing depth and power to his tone, and he’s also very good at creating big hooks while he’s at it. And that’s perhaps not his biggest strength, I believe him to be one of the absolute best live death metal vocalists – just check out “Sign From the North Side” below.

To me, Ross Dolan is the ultimate death metal vocalist. Not only is his voice thundering and passionate, he also writes great lyrics and dominates the live stage. He’s got the full package, and he’s also the perfect fit for Immolation’s sound. On top of all that, it also feels like he’s getting better and better with age.

But it’s just my opinion, so I hope we can all just chill and discover more awesome extreme metal music. Which leads me to one last small self-promo: check out my old school death metal band Desolator and my progressive death/doom metal band Soliloquium. 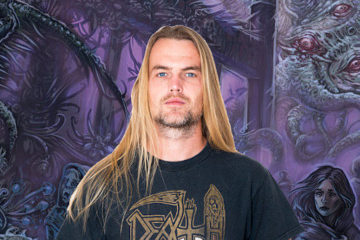 After doing my best to keep track during 2020, it’s now time to start following death metal from 2021. Here’s my list of the best and most interesting death metal albums from 2021, released and Read more…