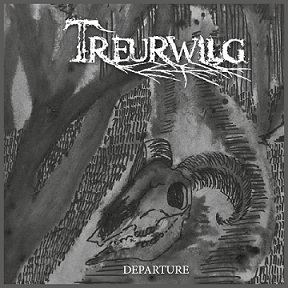 Many bands are playing death/doom metal these days, and it’s spreading far beyond the standard geography of Sweden, Finland and England. It’s nice to hear a Dutch band beyond Officium Triste trying the genre out. “Departure” is Treurwilg’s debut, and it sounds very professional for an independent band. The production is smooth and atmospheric, with instrumental tightness matching it to boot.

They generally play slow and dirgy, and some moments harken to the funeral doom genre. If I would compare “Departure” to another death/doom record it would probably “The Silent Enigma”. The usage of big, overbearing chords to create atmosphere is similar, even though this doesn’t evoke as much apparent gloom. There are unusually few guitar leads for an album of this type. The more melodic moments are often carried by clean guitars rather than lead guitars.

The vocalist’s growls and snarls are competent. You can certainly feel the anguish, though you can’t really hear the lyrics at all, which is a shame considering the genre. I also have a taste for hooks in my death/doom, and sadly Treurwilg don’t really have any. I don’t need all my doom be as catchy as Rapture, but even early, somnilent Anathema had strong lines that stuck with me right from the first listen.

Competence, rather than originality

“Departure” fails to pick me up and really grab me, despite being a quality listen. Another sign of this is is that I can’t really find a standout track after several spins. This might be the problem, and the challenge for the bands, with new death/doom bands popping up everywhere. It’s quite a limiting genre scope. Treurwilg’s first effort mostly shows competence, rather than originality. I’m by no means bashing them though, this is quality doom metal music. It will be interesting to see where the band goes from here.