Junius – Reports From the Threshold of Death review 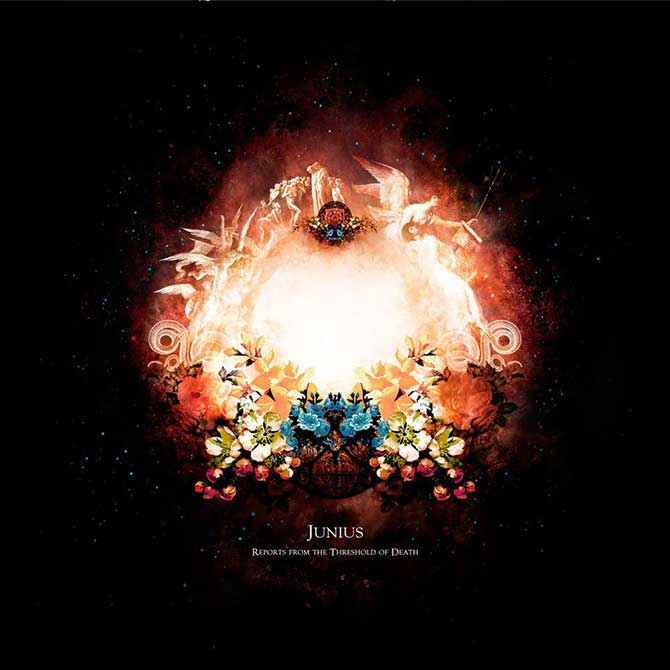 In the fall of 2012, I went to see Katatonia in Stockholm. The support bands were Alcest, that I already liked, and Junius, that I’d barely heard before. Even though my favorite band Katatonia performed well, it wasn’t what I would remember this night for. The initial synth tones of “Betray the Grave” (album opener on this disc) lured me to the stage. In a haze of darkness and smoke, I witnessed one of the better gigs I’ve ever had the pleasure of watching.

A dark winter followed, and “Reports From the Threshold of Death” took over my playlist more and more. “Betray the Grave” and its accompanying music video was already an obsession. However, with every listen, more and more songs proved to be immortal classics. It was almost like each individual song took turns in taking over my life for a week.

The Junius formula is simple, but effective

Junius songwriting formula is deceptively simple, just as the level of instrumental technicality. It’s their blend of influences that does it for me. Their sound is a marvelous cocktail of Deftones vocals, Katatonia pacing, Neurosis heaviness, bittersweet The Cure melancholy and huge new wave style choruses. There’s not much abstraction to be done, as the songs are straightforward, relying on the massive hooks.

This is where it gets tricky, because such a simple album shouldn’t warrant this many replays. I’ve literally spun every song on this album hundreds of times despite the simplistic formula. There aren’t many details to be uncovered upon repetition, the foundations of the songs are just so damn good.

A mold of different styles

The mood of the album is nocturnally bittersweet. It’s strangely uplifting in the way The Cure’s Disintegration is, carefully treading a line between Katatonia’s urban darkness and other, more reinvigorating concepts. This yin/yang sensation grows even more clear on their next full-length, Eternal Rituals for the Accretion of Light.

Instrumentally, the album is largely simple and based around 4/4 rhythms. The distorted rhythm guitars are downtuned and pack a lot of punch. Junius bring very little in terms of active riffing, it’s more about creating a wall of sound to support the vocals. The instrumental atmosphere is largely created by the synths and reverb-drenched clean guitars.

The vocals drive the album

The vocals, and more specifically the hooks, is where the album truly excels. The chorus melody in every song has been stuck on my head for weeks at a time. Junius often play with silent and loud dynamics to great effect, using walls of guitars, synths and vocal layers at the same time. Somehow, it doesn’t bother me that they do it on damn near every song on the album.

The vocalist took a cue or two from one my favorite singers, Chino Moreno of Deftones. He doesn’t bring much of his aggression though, favoring the melodic approach from songs like “Minerva” and “Hole in the Earth”. This matches the sludgy, doomy instrumentation and the synth presence incredibly well.

“Reports from the Threshold of Death” tracklist:

1. Betray the Grave
2. All Shall Float
3. Dance on Blood
4. A Universe Without Stars
5. Haunts for Love
6. The Meeting of Pasts
7. (Spirit Guidance)
8. A Reflection on Fire
9. Transcend the Ghost
10. Eidolon & Perispirit

What about individual songs? As I said, “Reports From the Threshold of Death” is packed with 10/10 tunes. “Betray the Grave” is an instant classic. “A Reflection on Fire”, “Transcend the Ghost” and “All Shall Float” are equally amazing. “Dance on Blood” is the only slightly weaker track, and it’s still great.

“Reports From the Threshold of Death” is one of my favorite albums ever, so I don’t have much negative to say. Lack of variation is probably the main complaint I’ve heard from other people. As I said, I think the songwriting quality just overrides that factor for me. Check out this album, it deserves to be a revered classic.