Bloodbath is an all-star death metal project featuring members from Katatonia, Opeth and Paradise Lost that produced many classic songs. They’ve gone through a few different eras with different styles and vocalist. The only album without a song featured on this list is “The Fathomless Mastery”, their only album I’m not particularly fond of. Here are my top 10 Bloodbath songs.

Do you agree with my Bloodbath song choices? Please post yours in the comment section! Oh, I also made a list of the top 50 Swedish death metal bands, as well as the 10 best Dismember songs and the top 10 Entombed songs. 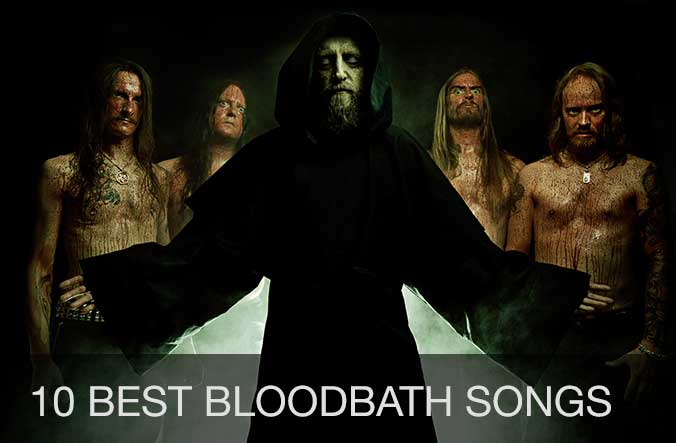 Might as well have chosen “Bathe in Blood” or “Trail of Insects” from the same album, but “The Soulcollector” has a gory, chainsaw-drenched semi-melodicism that I completely love. It’s a bit strange that they never tried this one out live, considering the massive vocal hook (“Know me as the soulcollector!”).

My favorite song from Nick Holmes era Bloodbath and a setlist staple for gigs to come. A really catchy classic death metal song with a lot of guitar wizardry, spiced up with a serial murder quite in the intro.

One of the more original songs from the Tägtgren era based on quirky mid-tempo grooves and melodies. His vocals fit perfectly, and it’s truly something else compared to other Bloodbath songs.

7. Ways to the Grave

The Bloodbath song featuring the most recognizable hook (no, not “Eaten”) has to be somewhere on this list. A perfect introduction to “Resurrection through Carnage”, since it’s based on a perfect blend of hooks, pounding guitar riffs and blood-wrenching melodies.

Who is the best Bloodbath vocalist?

This is a long disputed question, and my personal answer is Mikael Åkerfeldt. He was an unbeatable growler with massive depth, power and agility, especially between 2002 and 2008. Tägtgren is an enjoyable vocalist as well, in particular his higher register which brings something else to the table. Nick’s voice is decent, and fits the more dreary moments on “Grand Morbid Funeral”. I like his stage presence as live vocalist, despite that he can’t really keep up with the faster material from the older records.

Much like the rest of the “Unblessing the Purity” EP, “Sick Salvation” brings a more brutal, blastbeat-ridden version of Bloodbath on the table. “Sick Salvation” is catchy, headbangable and shifts tempos at exactly the right time to provide one hell of an impact. Oh, and the bass slide in the breakdown right before Mikael Åkerfeldt unleashes one of his best screams is one of the top Bloodbath moments.

One of the most technical Bloodbath songs, filled with drive and memorable riff action. The ending sequence is glorious: a signature Blakkheim tapping part that transitions into a brutal blastbeat part.

The Entombed-influenced grooves of this song is what initially got me into Bloodbath. It took me a while to realize how awesome the insane guitar tone was, but after that I was hooked. Extremely catchy riffs and vocal lines.

A perfect combo of brutality and semi-melodicism that culminates in a fantastic Blakkheim tapping part. At the same time it’s one of the most vocally catchy Bloodbath songs. Deserved classic and live setlist staple.

The ultimate Bloodbath song, which combines chainsaw riffs with grueling melodicism. Mikael Åkerfeldt’s performance is also top notch, even compared to his other growling at the time. His voice is as deep as it is acrobatic.