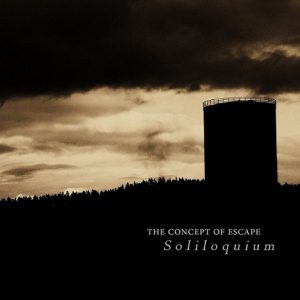 “The Concept of Escape” is a 2013 EP, the second release by Swedish death/doom metal band Soliloquium. It’s the successor to debut demo “When Silence Grows Venomous” and the predecessor to EP “A Night of Burdens”. The songs are included on the complation CD “Absence” on Transcending Records. You can download or stream the release for free from the Soliloquium Bandcamp page.

“The Concept of Escape” background story

“The Concept of Escape” is the first Soliloquium release with live drums, performed by Mortuz from Mist of Misery. It’s a much more professional release, both in terms of production and songwriting. Soliloquium transformed from an experiment to a serious project around this time. The traditional death/doom music from the debut was already getting laced with traces of shoegaze and progressive at this point.

The album cover accurately depicts the themes of “The Concept of Escape”. It was a strange time. One of surreal loss and confusion, but also one of rejuvination. I think it shows in the coming and going of intensity in the music. This is best mirrored in the opener “Crossroads” that combines a nostalgic main theme with active, progressive death metal style riffing. The song was written last minute and wound up surpassing the other two songs on the EP. Soliloquium’s “Paranoid”, of sorts.

“Remnants of Dying Dreams” was a decent mash-up of some older death/doom riffs, and “Nighttime Revelations” was the ultimate hymn to inner city abandonment. Silence, an apartment window, isolation and blurred city lights. In many ways, “Nighttime Revelations” introduced the Stockholm darkness that became so abundant on the successing releases and YouTube videos.

Just like on “When Silence Grows Venomous”, I’m using an ESP Ltd F-400FM tuned to C#. This time I had the guitar properly set up and played tighter. The sound benefitted from guitars through a proper amp. It felt like a huge step up, and next Soliloquium plunged into doing cover songs with the “A Night of Burdens” EP.

From Metal Archives:
“The second recording under the Soliloquium monicker, The Concept of Escape seeks a mild expansion of the melodic, saddened hues of its predecessor, the When Silence Grows Venomous. It’s successful in doing so, thanks largely to the dichotomy of three vocal styles and a tidal balance of driving melodic rhythm guitars and somber segues through which other emotions can breathe”

“The Concept of Escape” bio: