Kaunis Kuolematon hit my playlist like a bomb a few years ago with the debut “Kylmä kaunis maailma“. The Kaunis brand of death/doom metal combines familiar melodic Finnish aesthetics with a more urgent sense of angst. They don’t hold back on the raw emotion. “Kylmä kaunis maailma” was not as pretty and polished around the edges as many similar bands, something I appreciate. 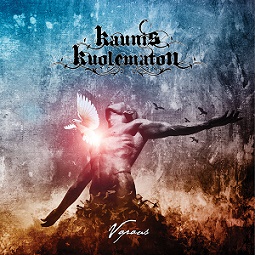 “Vapaus” has some more contemporary Finnish influence (think Ghost Brigade and Throes of Dawn), but still manages to keep most of the menacing depression from the debut intact. One thing this album unfortunately lacks are immediate hooks. No song really hits like the first time I heard “En Ola Mitään” or “Pimeyden Valtakunta”. More importantly, the atmosphere is still present.

The growls are once again mercilessly performed, and the production is a wall of rhythm guitars spiced up with melody from the lead guitars and atmospheric keyboard layers. Much like on the debut, most of the extreme metal segments on the album sound like an upgraded version of early Swallow the Sun.

The album goes three songs without utilizing Mikko Heikkilä’s gorgeous clean voice, but in “Yksin” it finally appears. On an emotional level, he certainly delivers. He has the one of the most genuinly sorrowful voices I’ve ever heard, and it’s once again on point. Kaunis would be an interesting death/doom metal band with only growls too, but the clean vocals are the icing that makes the band truly special.

“Tuhottu elämä” is the song that is closest to the debut in terms of style, relying on heavy distorted grooves, melodic lead guitars and a soaring clean vocal chorus with plenty of emotion. It’s a good representation of what the band can do, and certainly one of the album’s highlights. The melodic clean vocal parts around four minutes of the song is atmospherically breathtaking and musically stunning at the same time.

“Ikaros” and “Sanat jotka jäivät sanomatta” are also driven by these fantastic clean vocal melodies. They always add a lot of emotion and flavour when they appear. As I said earlier, the only thing missing from this album are the really big hooks. The last album was a bit catchier, but I suppose it’s a factor that many doomsters can overlook when the atmosphere is still there.

Not as good as “Kylmä kaunis maailma”, but still very nice

This band is very overlooked, despite that they now have two quality full-lengths out. Some interesting influences showed up here, and exploring the dark metal direction is certainly something that could make their sound even more unique. It would probably allow for even more usage of Mikko Heikkälä’s clean voice as well. Even though this doesn’t reach the heights of “Kylmä kaunis maailma”, it’s a quality doom album worth checking out.